Japan is a country, an island of lush landscapes and grand sites
Since 300 BC, 127 million people continue to rise to new heights

Buddhism was adopted, and broken into sects
Religion and culture hold the population it protects 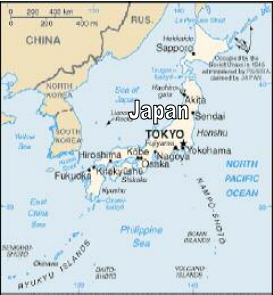 Hirohito was an emperor, victories in war chose to defy
Kamikaze was a typhoon that became a man who would die

Tokyo is its capital, Hiroshima the target of the first atomic bomb
Mt. Fuji, Kyoto, Yokohama, cities that promote peace and calm

Pay with the yen for Ryokan’s which are Inns and Minshuku’s a B&B
No matter where you sleep, you’ll find it heavenly

First names come after their last, reversing what we know
Sensei is used for teachers, volcanoes and earthquakes wait to blow

Steeped in etiquette and superstition, there are rules you must abide
Visit Japan the gracious nation, that embraces respect, family and pride.